Twin Flames originated from the same soul or essence that was created by Father/Mother God, The Source of All, the great field of unconditional Love and Being which contains both the Masculine and Feminine aspects of Creation. This One Essence or Soul divided itself into Two equal and opposite halves in order to experience relationship and form.

In the beginning the Twin Flames were completely united and existed as a trinity -- an expression of the Divine Source of all that is. The Twin Flame had unity consciousness and vibrated at a very high energetic frequency. Throughout the universal experience, and as the third dimensional world of form unfolded the Twin Flame became separated into the current system of duality consciousness and became two distinct forms, one carrying the masculine or yang attributes of the Creator, and the other carrying the feminine or yin aspect of the creator. Both aspects are the exact equal and opposite frequency intonation. On an energetic level they are opposites yet they are complimentary in nature and their essence and substance is part of the same unified whole that is the One/God/Source.

The Twin Flame dynamic transcends all definitions of male and female relationships on the planet. Most concepts of Love on earth have become diluted over time. Many people have a material or conditional understanding of what Love is. Traditionally, it has focused our attention and emotions on another person. These days, many relationships between people who claim to be 'in love' are focused more on the physical, emotional, mental or sexual aspect. It can sometimes be an egotistical or selfish love and often demands continual compromise to make the partnership work. If it is either an conditional love based relationship, one where ego is running the show, or once the romance or the passion dims, conflict or indifference begins and the relationship may eventually come to an end. 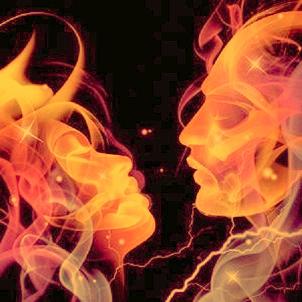 "Soulmates tend to find each other during their respective pursuits of their soul missions. Creating a soulmate could be seen as a spiritual reward that we give ourselves, after pursuing many soul contracts rife with discord" ~Linda Brady More Quotes

Signs of the Twin Flame or Soul Mate